All five of the Fulbright fellows are members of the class of 2014. Connecticut College has had 29 Fulbrights in the last five years, and is consistently recognized as a top producer of Fulbright recipients.

“It’s no coincidence that Connecticut College keeps producing Fulbright scholars at such an exceptional rate,” said President Katherine Bergeron. “Our students are trained to be thinkers, doers and leaders, and these five scholars are ready to make a profound contribution to their local and global communities. I am very proud of our 2014 Fulbright fellows, who, I know, will represent us very well abroad.”

Throughout her undergraduate experience, Jyoti Arvey has seized every opportunity to visit Russia. She was awarded a critical language scholarship by the U.S. Department of State the summer after her sophomore year to live and study in Ufa, Russia, and she spent  an entire semester abroad in St. Petersburg her junior year. In September, she’ll begin her Fulbright fellowship in the nation she’s come to love.

“I feel very much at home in Russia,” Arvey said. “The amazingly warm and welcoming people I have found there is what keeps bringing me back.”

Arvey, a Slavic studies major from Nyack, N.Y., said she is indebted to the academic department that has become her home away from home. She is awaiting her Russian destination, though she expects to be sent to a small city where the English learning need is greater than in larger cities such as Moscow and St. Petersburg.

Ellen Heartlein is excited to return to Germany for her Fulbright fellowship. The Boxborough, Mass., native has already spent a semester in Baden-Württemberg and Bavaria, and now she is preparing for her opportunity in Lower Saxony.

“Even though I have lived in Germany before, this an entirely new region and I have been back in the States again for another year,” said Heartlein, a double major in history and German studies. “I am really excited for this challenge, and will be accepting it with open arms in just a few months.”

Heartlein will teach English to teenage students. She plans to use films from the United States and Germany to enhance her teaching and build cultural and historical understanding.

A semester abroad in Rabat, Morocco, opened Maggie Nelsen’s mind to Islamic culture in the Arab world. With a Fulbright fellowship to Malaysia secured, she is excited to see the Muslim influence in southern Asia.

Nelsen, of Vienna, Va., departs for Kuala Lumpur in January 2015. A government major with minors in sociology and history, she said she’s intrigued by the convergence of traditions, including Malaysian, Chinese and Indian, that she will find as an English teacher to children.

Nelsen said she is ready for the linguistic and other challenges that await her in Malaysia. “Being challenged is an important part of building character and I am looking forward to it.”

Anthony Sis was preparing to present at a convention in San Francisco when he learned he had won a Fulbright fellowship. Later that day, he and his friends celebrated with a walk along the entire span of the Golden Gate Bridge.

Sis, a government major, is headed to Vila Real, Portugal in October. He will teach English at the University of Trás-os-Montes and Alto Douro. A Chicago native, Sis is a scholar in the Posse program, which recruits and trains promising public school students from urban areas to attend selective colleges together. He was very involved on campus and in service to New London, including his work in the Holleran Center for Community Action and Public Policy’s Program in Community Action (PICA).

"My exposure to the New London community, in addition to my study abroad experience, has served as a fundamental core to my academic success," he said. “I want to get involved in the higher education system in Portugal and really learn the culture.”

Blair Southworth knows that significant challenges await her during her Fulbright fellowship in Indonesia. She’s headed for an unfamiliar country halfway around the world, but says she is excited for all the same reasons that she is nervous.

“I expect many aspects of this coming year to be demanding. It’s daunting to know that I will be pushed and challenged in unique ways, but it is also one of the core reasons I chose to do a Fulbright,” Southworth said.

An environmental studies major from Andover, N.H., Southworth previously participated in the College’s Study Away, Teach Away program in Hanoi, Vietnam. She is also a scholar in the College's Holleran Center for Community Action and Public Policy. She leaves for Jakarta in August and seeks to raise awareness about climate change’s effect on the Indonesian community where she will be assigned. 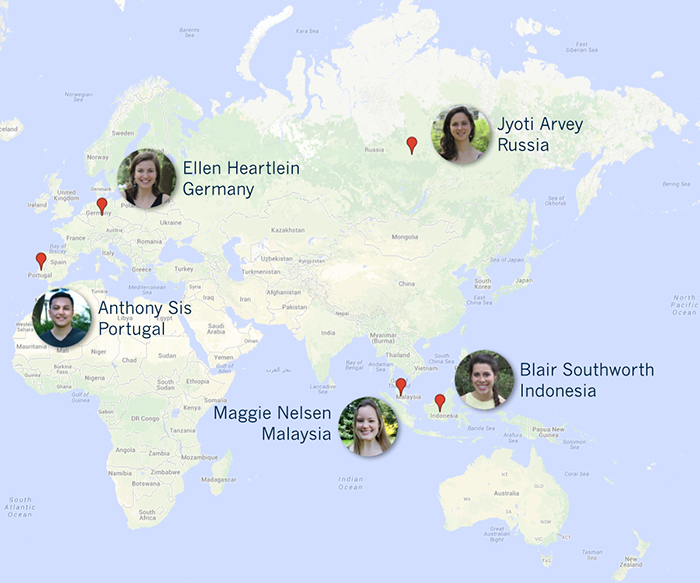